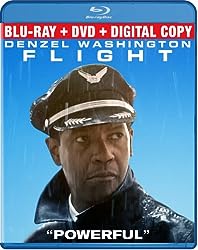 The 2012 movie titled “Flight” is a great movie to watch. It had me hooked from start to finish. I do not want to be a party spoiler, so I will not go into much details as to what transpired in the movie. The movie stars Denzel Washington. Basically, it is a movie about an airline pilot named Whip Whitaker (Washington) who miraculously crash-lands his plane in an open field after a mid-air catastrophe that basically knocked out a lot of the plane’s control mechanisms. If any other pilot was flying the plane, as was acknowledged in the movie by his superiors and others, no one would have survived the crash. But even as Whitaker is being hailed for his heroic efforts, a number of questions arise as to who or what was really at fault. This is because it could be due (1) to Whitaker’s abuse of drugs and alcohol, which he did the very night before the crash, or (2) to the plane itself which was acknowledged as being faulty from before it took off for the flight. You need to watch the movie to see how it all unfolds.

Flight is action-packed, engrossing and powerful. I would recommend anyone to watch it. But be mindful of the R rating that the movie has due to the presence of drug and alcohol abuse, language, sexuality/nudity and an intense action sequence. Parental discretion is strongly advised. All in all, I give the movie a thumbs up and a 4 out of 5 stars rating.

This website uses cookies to improve your experience while you navigate through the website. Out of these, the cookies that are categorized as necessary are stored on your browser as they are essential for the working of basic functionalities of the website. We also use third-party cookies that help us analyze and understand how you use this website. These cookies will be stored in your browser only with your consent. You also have the option to opt-out of these cookies. But opting out of some of these cookies may affect your browsing experience.
Necessary Always Enabled
Necessary cookies are absolutely essential for the website to function properly. This category only includes cookies that ensures basic functionalities and security features of the website. These cookies do not store any personal information.
Non-necessary
Any cookies that may not be particularly necessary for the website to function and is used specifically to collect user personal data via analytics, ads, other embedded contents are termed as non-necessary cookies. It is mandatory to procure user consent prior to running these cookies on your website.
SAVE & ACCEPT
Posting....